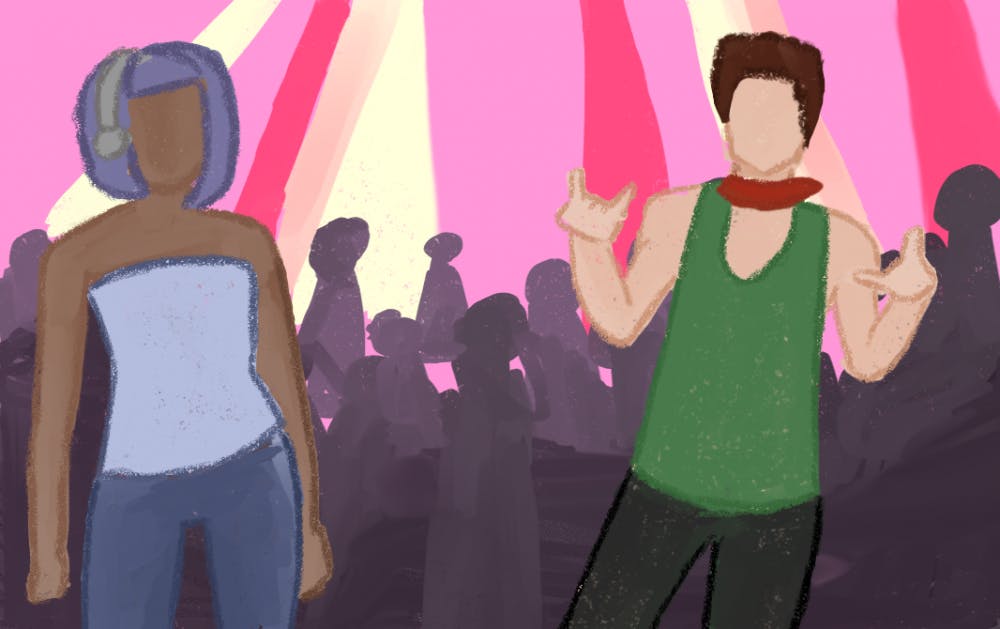 Photo by Merit Eads | The State Press”Spend your spring break enjoying music festivals around the valley.” Illustration published on Thursday, Feb. 28, 2019.
By Marissa Whitey | 5 hours ago

Spring break is packed with a variety of opportunities for music lovers, as it coincides with a number of music festivals around the Valley that aim to give audience members unique experiences.

And for three Valley music festivals near ASU, attendees can enjoy both local and national acts while contributing to the community.

Kicking off the week of musical fun near ASU campuses is the McDowell Mountain Music Festival, or M3F, which will be held from March 1 through 3 at Hance Park in downtown Phoenix.

Heather Rogers, festival manager of M3F, said that it is a family-friendly event with a variety of musical guests that will appeal to college students, including performances from Odesza, Empire of the Sun and Kurt Vile.

M3F has been a nonprofit event since its inception in 2004, Rogers said.

“We raise all the money, hold the event and then we give all of the proceeds that are leftover to local family-based charities here in Phoenix,” she said.

This year, the beneficiaries are the Phoenix Children’s Hospital music therapy program, the Arizona Leukemia and Lymphoma Society and the Habitat for Humanity of Northern Arizona.

“We want to affect the community and the culture,” Rogers said. “By getting the community outside and interacting with each other, we can see how we’re changing and affecting people.”

Another musical experience students can attend this weekend is Innings Festival.

Held at Tempe Beach Park from March 2 to 3, Innings Fest will feature acts like Grouplove, Incubus and Shakey Graves.

The festival is baseball themed and will feature a variety of activities such as batting cages, a virtual reality home run derby and more. Tim Sweetwood, the Innings Festival manager, said the theme is related to Spring Training season.

“We wanted something that could celebrate music and baseball, since there is such a big fan base of both of them in town during March,” Sweetwood said.

He said Innings Festival will donate a large financial contribution to the community organization Tempe Diablos Charities, which will distribute the money to local charities.

For the following weekend, Flying Burrito Music and Food Festival is a one-day festival held at Crescent Ballroom in Phoenix on March 9.

The festival will feature over 25 bands playing across four stages, including a mix of local acts like Playboy Manbaby, Breakup Shoes and Calexico, along with national acts.

Stephen Chilton, who graduated from ASU in 2005 with a philosophy degree, is a talent buyer for the festival.

Chilton said the lineup is “eclectic” with “a lot of very neat and up-and-coming acts.”

“If you’ve heard of one or two of these bands, you’ll probably like a lot more of the bands on it,” he said. “It’s a very easy price to get in and see them all.”

Between acts, attendees can choose from a selection of over fifty types of burritos, or stop and watch live lucha libre wrestling.

Flying Burrito Festival also aims to support local restaurants and vendors by featuring them at the event, including tables hosted by food truck Los Jeztecos and Roosevelt Street’s Jobot Coffee and Bar.

Robbie Pfeffer, who graduated from ASU in 2013 with a global studies degree, will perform at the festival with his Phoenix-based band Playboy Manbaby.

Playboy Manbaby released its fifth album, Boundless Vanity, in November 2018. Pfeffer said the album is about self exploration and empathy.

Playboy Manbaby is currently on tour supporting Okilly Dokilly, and Pfeffer said that while they are having an amazing time, they are excited to play the Flying Burrito Festival alongside other Arizona bands such as Nanami Ozone and Pro Teens.