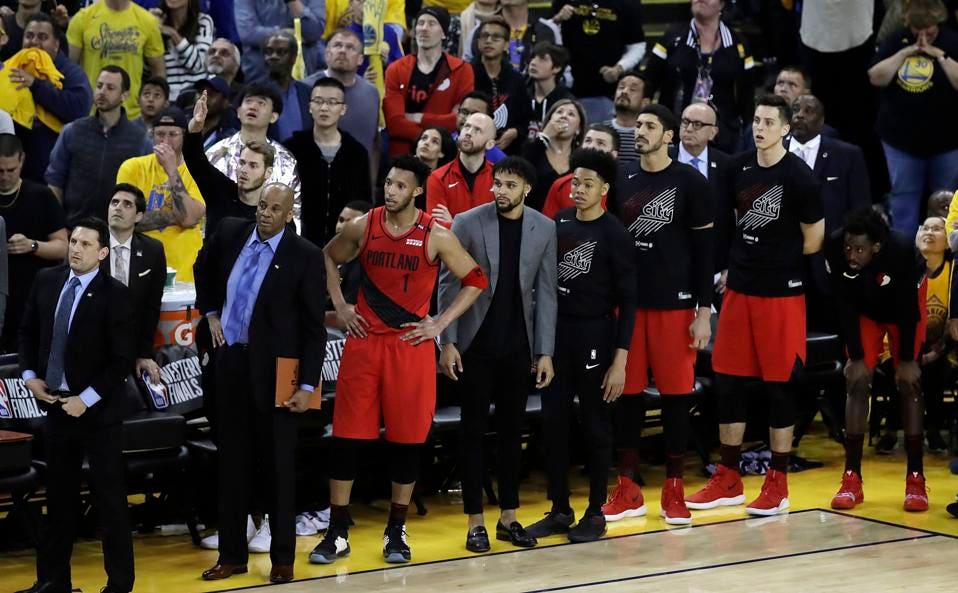 The Portland Trail Blazers gave a beautiful, even dominant performance in Game 2 of their Western Conference Finals series against Golden State at Oracle Arena on Thursday.

Then the second half started.

The Warriors turned up the heat defensively and got another superb performance from Stephen Curry to take a 114-111 win and move to Portland with a 2-0 series lead.

The Blazers did so much right in taking a 65-50 halftime lead, the 65 points the most they’ve scored in a first half in the playoffs. After losing convincingly in Game 1, the effort seemed just what Portland needed.

Ever after the Warriors flipped the game in the third quarter, Portland still was in good position to win late and was up by eight points with 4 minutes and 28 seconds remaining. They made one basket the rest of the way.

The opportunity to get a road win was so golden for Portland, Warriors coach Steve Kerr admitted his team got away with a less-than-stellar performance.

The first half had all the earmarks of the Blazers’ victory, with forward Al-Farouq Aminu making himself an offensive factor after taking just three shots and scoring three points in Game 1. With the Warriors defense so focused on the Blazers guards, particularly Damian Lillard, Aminu has the opportunity to score, and he cashed in with nine points in the first quarter. Lillard, who didn’t score in the first quarter, came alive with 10 points in the second.

Meanwhile, the Blazers closed the space on Golden State shooters, who had shot 17 for 33 on 3-pointers in Game 1, and limited them to 3-for-13 3-point shooting in the first half.

But Golden State turned up the defense in the third, extending the pressure on and often trapping Lillard and CJ McCollum. Portland committed five turnovers in the quarter, leading to 13 Golden State points, and the Warriors scored 11 points on fastbreaks as they outscored Portland 39-24 in the quarter.

“Our turnovers in the third quarter did hurt us,” Stotts said.

The Blazers were still in decent shape entering fourth quarter tied 89-89. Remarkably, through 82 regular season games and 14 playoff games, it was the first time this season Portland was tied in a game after three quarters.

Those three were the only Portland players who scored in the fourth quarter. McCollum, who had played a strong first three quarters, when he scored 22 points and shot 9 for 17 from the field, missed all six of his shots in the fourth, including five in the final 4 minutes.

“I think it’s just a make-or-miss league,” McCollum said. “They played good defense, but I can live with the shots that I missed every day of the week.”

Still, it’s not every day a team gets this prime an opportunity to win at Golden State to tie a playoff series with the two-time defending champions. The Warriors won their third game in a row with Kevin Durant, who leads all players in playoff scoring, out with a calf injury. It appears Durant will also miss Games 3 and 4 in Portland, where the Blazers are 5-1 in the playoffs and will lean on a home crowd that will get to see its first Western Conference Finals games since 2000.

“Just take care of home,” Lillard said. “We gotta take it one game at a time, obviously.”