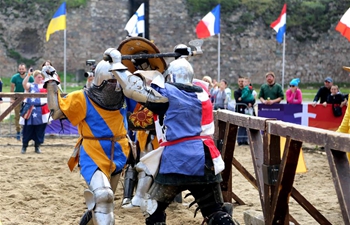 SHENYANG, May 7 (Xinhua) — Railway authorities in Shenyang, capital of northeast China’s Liaoning Province, said Saturday that they have launched 94 additional trains to tackle the rush of travelers heading back to school and work on the last day of the May Day holiday.

Train stations under the jurisdiction of China Railway Shenyang Group Co. Ltd., such as those in Shenyang, Changchun and Dalian, all reported peak traffic Saturday.

The group said it would have about 1.12 million passengers on Saturday.

China’s extended May Day holiday this year is expected to see a “tourism craze” with an estimated total of 160 million trips, according to the country’s biggest online travel agency Ctrip.

The State Council, China’s cabinet, announced in March that this year’s May Day holiday would be extended to four days, from May 1 to 4.

To meet the demand of growing travelers, the China Railway Corporation has prepared more trains. The railway operator expects some 68.2 million railway passenger trips from April 30 to May 4, a growth of 10.9 percent year on year.

Chinese tourists made 147 million domestic trips during the three-day long May Day holiday last year, up 9.3 percent year on year.