In June, Matty Roberts started a viral Facebook event called “Storm Area 51.” His Facebook event has 2 million “attendees,” he’s launched a small business, and now he’s responsible for a festival in the Nevada desert that has stirred tensions with the local town.

With tens of thousands saying they want to go to the festival in the next few weeks, will the Storm Area 51 event actually happen? A joke Facebook event has now spurred three supposedly real festivals over the weekend of September 20.

In Lincoln County, Nevada, two events have been temporarily approved by municipal boards: Roberts’ ‘Alienstock’ located just outside of the tiny Rachel, Nevada at the Little A’Le’Inn, and the spin-off ‘Storm Area 51 Basecamp’ event located in Hiko, Nevada at the Alien Research Centre. The two events are only 40 miles away from each other, and offer similar promises of camping sites, access to food, water, and live music.

In an interview with Motherboard, Emily Wofford, a spokesperson for the Storm Area 51 Basecamp event explained that the festival is “focused on providing both an entertainment and education experience for those fascinated by Area 51 and UFO technology. We are working to create a Burning Man meets Comic Con experience for both believers and the uninitiated.” According to the event’s website, tickets are $51, RV spots are $150 per day, and tent spots are $50 per day. They also throw in two bottles of water and a lanyard.

“In the highly unlikely chance we do not receive full permitting,” Wofford told Motherboard, “we would of course refund all tickets and reserved camping spaces. But, again, that is not going to happen. We will have an event.”

Alienstock promises a different experience, although it is unclear as to what that actually is. Framed as more of a music festival, the website states that it’s “aiming to establish something unique here, a meeting place for all the believers. A place to freely discuss Aliens & the Unknown! When you arrive, you can expect Live Music, Great Food, and a Camping Experience!”

Unfortunately, beyond that, it is unclear as to what is actually taking place (if anything). There is no specific information regarding food vendors, camping details, or what bands are participating. There is also this ominous quote on its website: “This event is taking place whether we set up or not- it’s basically its own entity now. Our main objective is constructing a temporary infrastructure for Rachel, NV.”

Parking and camping spots run between $60 and $140 with a firm “all sales are final” policy.

As was reported previously, the local population of Rachel is not too thrilled about Alienstock. The town website clearly stated that local residents would protect themselves and their property if forced to. The town has since updated its website to read that the situation “could get ugly.” The website also states, “This event will undoubtedly attract crooks trying to capitalize on the chaos. Be on your guard and always lock your vehicle. And stay away from the residential part of Rachel. Most residents do not like where this event is going and will respond accordingly.”

The Alienstock organizers did not respond to Motherboard’s request for comment. 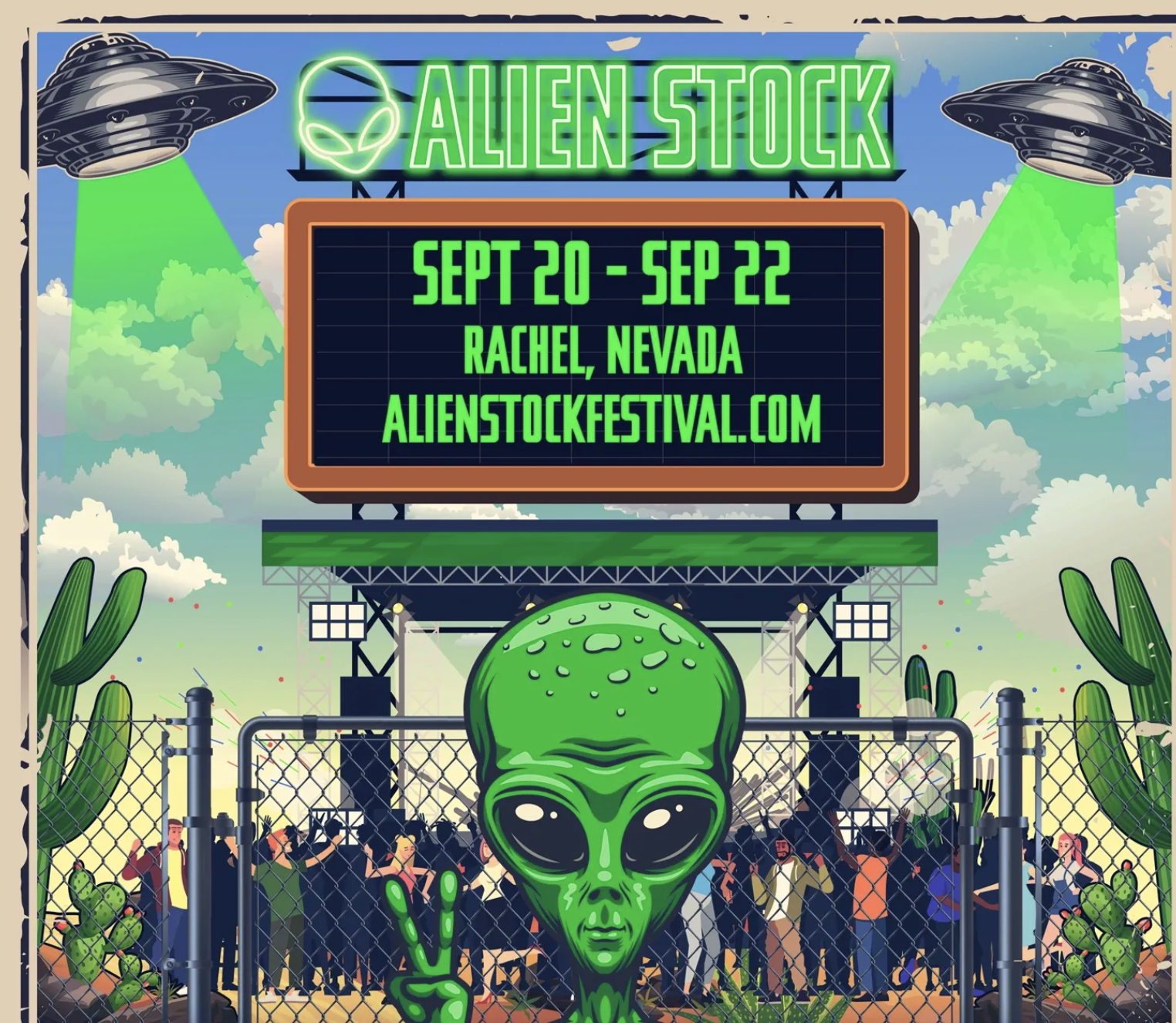 In Nye county, Nevada, a third ‘Storm Area 51’ inspired event has been denied a permit. The event organizers of Peacestock51, David Van Der Beek and Bryan Scott, presented a 50 page plan that outlined security, medical services, and operations plans. Similar to the residents in Rachel, the locals were concerned about public safety and the massive influx of people to their area. In an interview with the Las Vegas Review Journal, Nye Commissioner John Koenig stated, “There’s gonna be people probably running out of gas and are probably going to get stuck in the lousy road that’s there. We have neighbors here that are really unhappy. Personally, I sit here because these people elected me. These people are No. 1 on my list. Their safety, their convenience and their welfare. Everything else is secondary.”

While Lincoln County may have granted temporary permits for ‘Alienstock’ and ‘The Storm Area 51 Basecamp’ to occur, both festivals must get insurance and traffic permits from the Nevada Department of Transportation by September 3rd. If the insurance and permits aren’t issued, both UFO parties might lose their permits.

If they lose their permits, it’s anyone’s guess if these festivals will still happen. Presumably, people have already bought tickets, paid for their camping spots, purchased air fare, and begun packing their desert survival kits (local hotels are booked solid). People may try to gather, with or without government approval.

If thousands of people gather and proper security, medical, shelter and food services are not established, there could be problems. For instance, there is no medical facility nearby that could effectively deal with serious injuries and Lincoln county’s 11,000 square miles is covered by a police force of only 28 officers.

There is little doubt that the world will be watching what occurs during the Storm Area 51 weekend, and if these events do lose their permits, will the viral internet movement still descend upon the quiet deserts of Lincoln county.